Rick Griffin was born near Palos Verdes, California June 1944.  During his childhood he would accompany  his father, who was an archaeologist on digs in the Southwest.  His exposure to Native American and ghost town artifacts influenced his art work.  He was introduced to the art of surfing at a very young age, this along with his love of cars and motorcycles were influences in his professional art work. His character Murph the surf was well known in surfing circles. 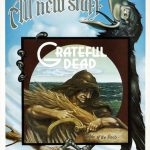 Destiny played a profound roll in his life at the time he was about to leave the US and emigrate to Australia, Rick hitched a ride and was involved in an auto accident that left him near death.  He remembers hearing the words of the 23rd Psalm.  In later years this event proved a factor in his later conversion to Christianity.  The event also caused his left eye to be dislocated and it is thought that this influenced his characteristic fluid lettering. 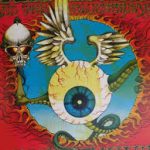 In 1967 he produced a poster for the Human Be-In in Golden Gate Park this was advertised as the “Gathering of the Tribes”  and as the Summer of Love continued he was in high demand.  He produced a series of posters for Chet Helms,( Family Dog) and Bill Graham (Avalon Ballroom and the Filmore).

Along with Alton Kelley, Stanley Mouse, Victor Moscoso and Wes Wilson, he became known as one of the “Big Five” of psychedelia.  In 1967 they founded the Berkeley-Bonapart distribution agency to produce and sell psychedelic poster art.  The famous “Flying Eyeball” poster is among one of the most important of contribution to the psychedelic art movement. In  the 70’s he produced the illustrated Book of Saint John and later created work for the Calvary Chapel in Costa Messa. 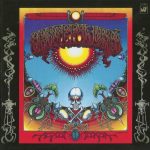 It was on August 15, 1991 that Rick placed a phone call to the Robert Beerbohm’s gallery from a payphone in a grocery store.  He learned that one of hjis paintings had just sold for $1800.  On his way home he was forced off the road by a van and he died three days later from his injuries. 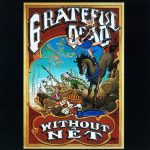 I am so happy to have had the opportunity meet him and know that his work will be appreciated for generations to come.  His loss was overwhelming he was a true visionary and an outstanding talent.

Many of his art work is represented in Woodstock Trading Company in poster, magnets, clothing and products for the home.